Gerald “Gerry” William Brown, born in Edmonton in 1915, came to Cornwall in the fall of 1939 to play hockey for the Cornwall Flyers. He played here for two seasons with the Flyers, then went to Detroit of the N.H.L. in 1941.

Gerry joined the Canadian Army in Cornwall in 1942 and took his training here. He played for the Great Canadian team under Lex Cook. He finished his officer-training course at Brockville Officers Training Centre.

After World War II, he was sold to Toronto from Detroit and sent to Buffalo, then to Hershey.

He conducted a hockey school for youngsters here in Cornwall, and was used to advantage by the CMHA tournament officials.

A very ardent sports fan, Gerry relaxed only when he played golf in the summer months. 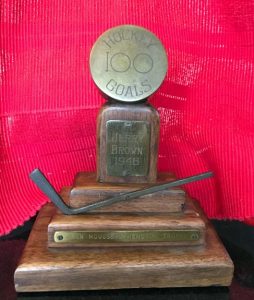